Five (Awkward) Ways to be More Victorian this Valentine’s Day

Five (Awkward) Ways to be More Victorian this Valentine’s Day

While the origins of Valentine’s Day can be traced back to the ancient Romans, the holiday wasn’t widely celebrated commercially until near the end of the 19th century. However, this didn’t mean that people in the Victorian era (1837-1901) didn’t take time to socialize or flirt with a sweetheart or crush! Parlor games were the perfect opportunity for mixed companies to get to know each other – sometimes a little more intimately than we modern-day people realize. Want to give it a try? Here are five (awkward) games you can play to be more Victorian this Valentine’s Day:

You may have heard of this one, now commonly known as Blind Man’s Bluff. Choose one person to be “it.” That person is blindfolded and placed in the middle of an open space, which may or may not contain various obstacles. In order to not be “it,” this person must attempt to catch another participant while blindfolded – and then figure out who that person is by touch. As you can imagine, some awkward situations may arise when playing this game with a group of young men and women – including the possibility of running into trees while blindfolded!

(Another version of this game, with slightly less hazardous conditions but no less awkwardness, is Blind Man’s Buff Seated. The players are all seated in a circle in chairs; the player that is “it” is then blindfolded. The other participants then switch chairs and the “blind man” sits on someone’s lap and tries to determine that person’s identity.)[1]

This game is a favorite with guests of all ages, but also a favorite for our GRITs (the teen volunteers here at the Ranch). The main objective of this game is to keep a down feather or a piece of cotton floating in the air as long as possible – without using your hands, feet or any other part of your body. To be successful at this game, you have to keep the feather floating as long as possible by blowing on it. As you can imagine, this leads to various awkward encounters such as accidental head butts, tripping over others (and furniture, for that matter) and, as with Blind Man’s Buff, the possibility of getting close to someone that, if it weren’t for the innocence of a game, may not seem appropriate in other settings.[2] 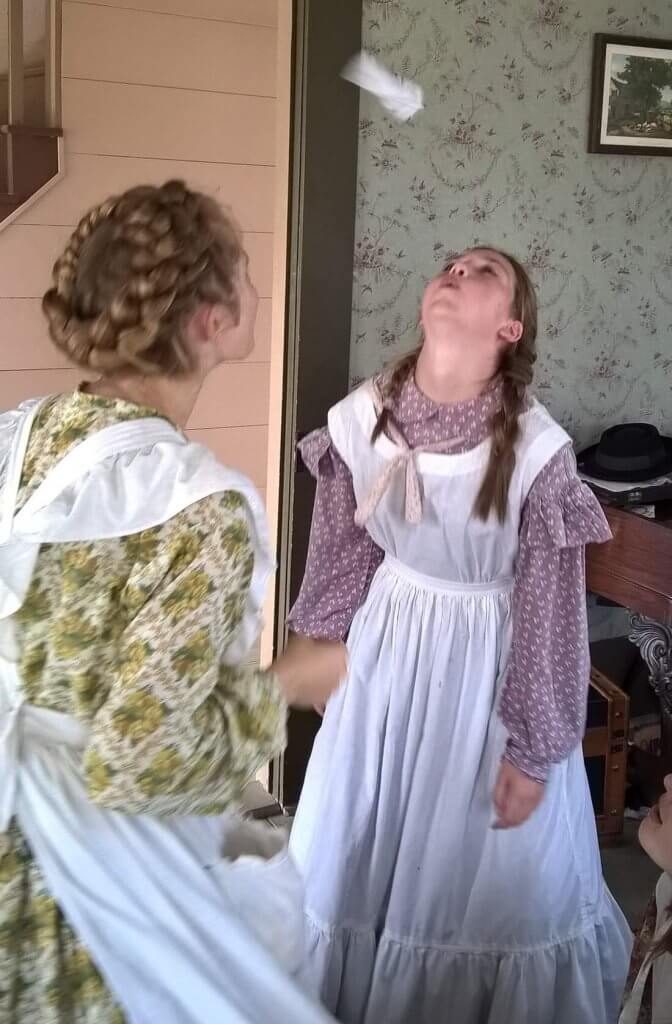 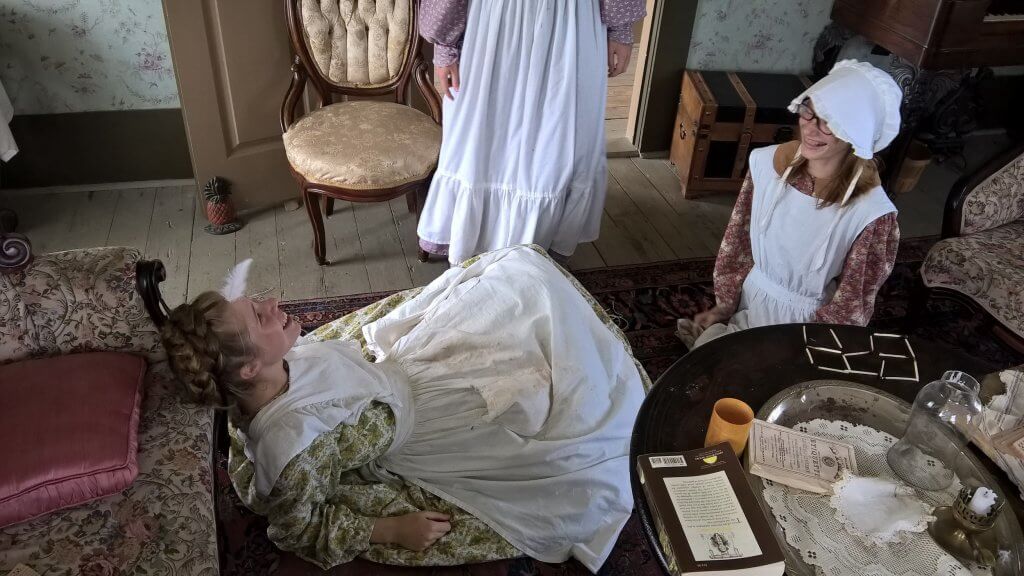 Forfeits: For When the Game Itself isn’t Awkward Enough

Sometimes the Parlor games weren’t all that awkward – or even exciting. So Victorians could add some fun and awkwardness by implementing “Forfeits.” Forfeits are an act that a player has to do if they were to lose a particular game. The following are some examples of Forfeits from one of our go-to parlor game books originally written in 1858: The Sociable; or one thousand and one home amusements.

Out of the 56 different forfeits in this specific book, most of them consist of kissing in some way or fashion. Talk about awkward.

This next game doesn’t have a specific name but has been played since at least the 1700s. This game is like bobbing for apples – except the apple is hung from a string and attached to a stick with a burning candle on the other end of the same stick: 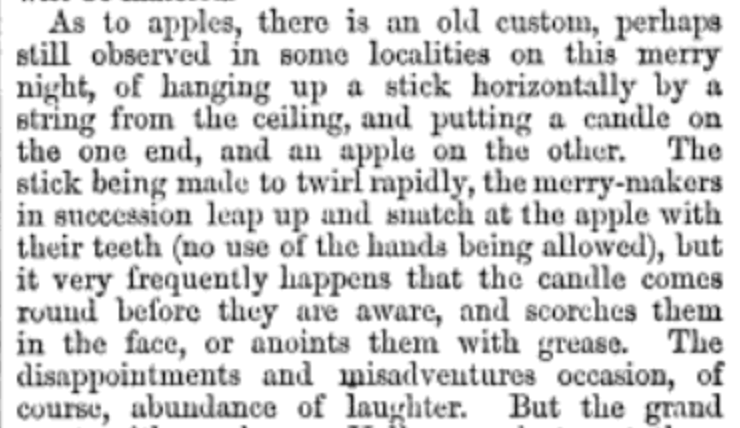 This game was suggested for All Hallows Eve and came from a book published in 1863. Out here at the Ranch, we like to live dangerously… but not that dangerously…so we have adapted this game to replace the burning candle with a bag of flour. Our players are very rarely successful and end up covered in flour.[3]

The last awkward way to be more Victorian this Valentine’s Day requires that you throw all modern safety ideas out the window (disclaimer: do not try this at home). Fill a bowl with brandy, then drop in some raisins (plums or other small fruits or nuts will work too). Now here comes the fun part: Light the brandy on fire. Players now try to grab as many pieces of fruit as they can, which are suspended in this bowl of flaming alcohol. Now tell me what’s not awkward about walking around with burns on your hands because you wanted to have a good time?

Second Disclaimer and Conclusion: If you try any of these at the next party or get together you’re at, it’s not our fault if you find yourself in an awkward situation!

[1] Arnold, George, and Frank Cahill. The Sociable, or, One Thousand and One Home Amusements: Containing Acting Proverbs, Dramatic Charades …: Illustrated with Nearly Three Hundred Engravings and Diagrams, the Whole Being a Fund of Never-Ending Entertainment. Bedford: Applewood Books, 2001. (repro – original 1858)

[2] Arnold, George, and Frank Cahill. The Sociable, or, One Thousand and One Home Amusements: Containing Acting Proverbs, Dramatic Charades …: Illustrated with Nearly Three Hundred Engravings and Diagrams, the Whole Being a Fund of Never-Ending Entertainment. Bedford: Applewood Books, 2001.

[3] Chambers, Robert. The Book of Days. A Miscellany of Popular Antiquties, in Connection with the Calendar . Vol. 2. W.R Chambers , 1863.