Anniversary Celebration on
Saturday, July 13, during regular Park hours: 9 a.m. to 5 p.m. In appreciation of the enduring friendship and support of the community over the years, the park is offering FREE admission for everyone, plus 25 cent snacks and sodas while supplies last.
In July of 1988, the George Ranch Historical Park opened its gates and welcomed visitors for the first of many years to come. The original staff was made up of motivated young professionals who were ready to take on the challenge of making the idea of a living history experience into a reality. Only a few members of that first small group are still at the Park today.
Candace Jones, Director at George Ranch Historical Park, said “It has truly been an honor and a personal joy in my life to have been a part of the Historical Park from its opening in 1988 and now have the privilege to serve as its director.” Jones described her earliest job responsibilities at the Park as a mix of secretary, book keeper, gift shop manager and tour guide.  In those days, everybody had to do a little bit of everything!
Jones remembers, “…being part of a highly enthusiastic and talented group of individuals who had a sincere passion for our mission. And it’s still that way here 25 years later! I can’t imagine a more dedicated team with such joy for their work.”
Operations Manager for The George Foundation, Rocky Parr has been with The George Foundation since 1977, long before the Historical Park came to be. One of his first projects was taking down old barbed wire fences on the 12,000 acres now dedicated to farm land. Over the course of 25 years, he would assist in Park improvement projects including new construction and moving historic homes into the Park to complete the 100 year story of the George family’s roots.
The George House and Cattle Complex were the only historic structures that were built within the Park before it was open for visitors. The Davis Victorian Mansion was moved in 1977 from in front of Polly Ryon Hospital, now Oak Bend Hospital, in Richmond. In the early 1990s, the first site to be developed was a historically accurate reconstruction of the 1830s Jones Stock Farm dog trot cabin and outbuildings.  The development of the Sharecropper Cabin and outbuildings added another small but historically significant storyline. The fourth and last major component of the family storyline was complete when the reconstructed 1860s Ryon Prairie Home complex opened to the public in the fall of 2006. The newest addition to the Park is the George Ranch Heritage Trail and native Prairie Restoration, which only just opened this spring. 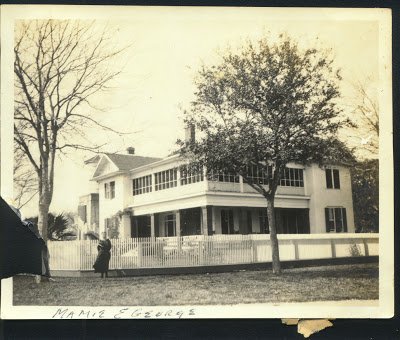 This photo of the 1930s George Home is part of
the Park’s vast historical archives. 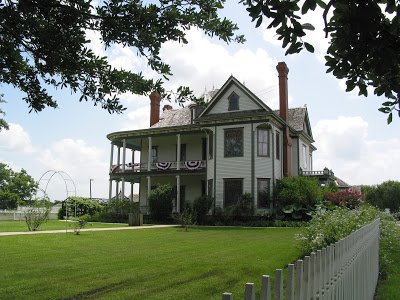 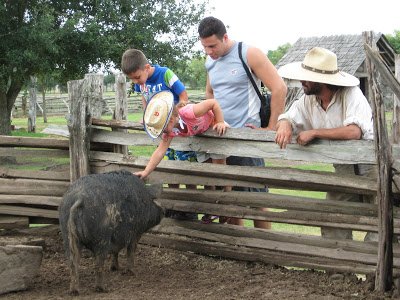 Park Interpreter J.R. Thomas introduces a family to
a hog at the 1830s Jones Stock Farm. 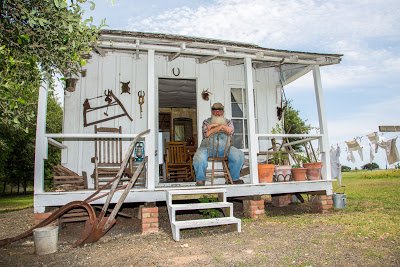 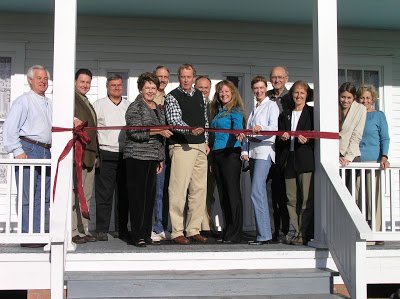 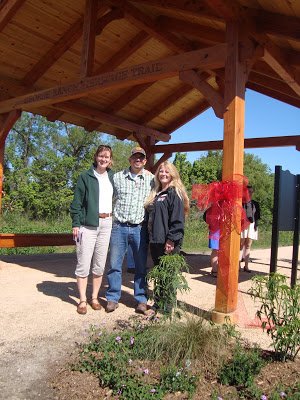 Amanda Hughes-Horan, Scott Barnes and Candace Jones
at the Grand Opening and Ribbon Cutting for
the George Ranch Heritage Trail on May 4, 2013

Parr said, “I feel that the Park has always been great from the start, but now we are prepared to be more accommodating with facilities including restrooms at several locations, the Dinner Bell Café, gift shop and a wide variety of venues available for site rentals.” 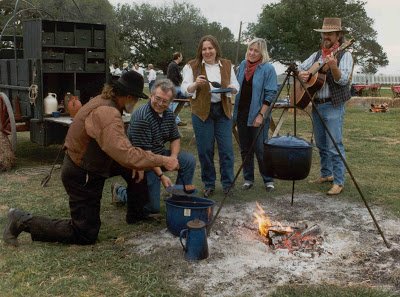 Cowboy Interpreters entertain a group of guests at a private
Chuck Wagon Fandango. Events large and small can be
hosted at a variety of venues, available through
George Ranch Historical Park’s Site Rentals Department.
Aaron Kalinowski was one of the first Cowboy Interpreters hired on when the Park opened. He moved up the ranks to become Lead Cowboy Interpreter in 1995, and in 1998 became the Livestock Manager for the George Foundation.
Kalinowski recalls weekend attendance being so low in the beginning that a family could practically have the whole Park to themselves on any given Saturday. “At first, nobody really knew we were here. I remember saddling up a horse and riding down the road out front with a flag under the assignment: ‘make it look like something is going on.’”
In the very beginning, visitors came to the Park through two simple white gates, without the cattle guards or the beautiful landscaping that now welcome them in by the bus-load. Upon arrival, they ventured into the Krause General Store to check in and watch a short orientation film. Guests are now greeted and given a detailed site map and day schedule when they enter the doors of the spacious Visitors Center, featuring a gift shop, exhibit section and café. Early programs included cowboy shows at the 1930s George Cattle Complex and guided tours of the George Home and 1890s Davis Victorian Mansion.
Kalinowski said, “The tram would go from the George Cattle Complex, out to the Bramblewood Barn and Blacksmith Shop, (where the 1830s Stock Farm and Cabin now stand), and turn around to go back up to the Davis Mansion. There was no Ryon Prairie Home, no Sharecropper Farm, no Heritage Trail, and the double bridges over the creek hadn’t been built yet.” 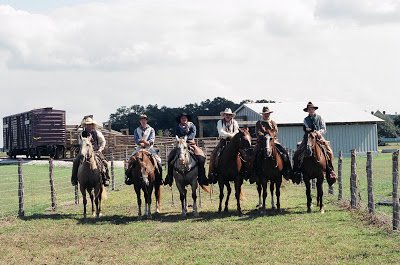 Aaron Kalinowski (far left) is among the Cowboy Interpreters
preparing for an early Rail Car Round-up demonstration
with the Longhorn cattle.
“Our visitors are now exposed to the complete timeline of the family history and its correlation with significant events in Texas history,” Jones said. “The Park has often been called one of the best kept secrets in Fort Bend County. These days, it’s apparent that the secret is getting out. A significant part of our visitation is international visitors from all over the world who want to experience the Texas mystique.  We are a nationally acclaimed living history site highly regarded for the quality and authenticity of the educational programs.”  She also proudly adds that the George Ranch Historical Park has received accreditation from the American Alliance of Museums, “We are part of an elite group of less than 5% of museum and living history sites nationwide recognized for maintaining the highest standards of professional excellence.”
The George Ranch Historical Park is still growing with exciting new programs and activities for visitors of all ages. Goals for the future include increasing first time and repeat visitation, service upgrades to make the visitors’ experience more comfortable and further development of educational opportunities.
“The Park offers a wonderful educational experience for young and old – especially the young! Today’s kids are so wrapped up in their video games, computers and phones that they never hear the birds sing because they don’t stop to listen to nature,” Parr said. “The Park gets them outdoors and actively participating in hands-on learning experiences.”
“People who think the Park doesn’t have very much to offer just don’t know how little we started out with,” said Kalinowski. “ There’s so much here now with four historic home sites that take you through 100 years of Texas history and a calendar that is jam packed with special programs and events that will give you a different experience every time you visit. When we first got this thing off the ground 25 years ago, I don’t think any of us ever dreamed how successful George Ranch Historical Park would be.”
“There’s no place like the Ranch…” – Mamie George 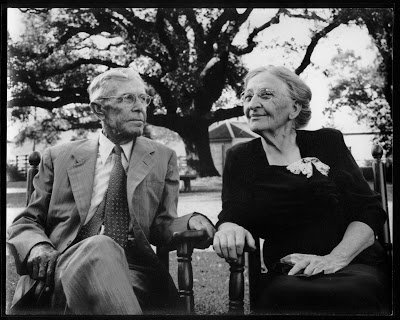 A.P. and Mamie George left behind an invaluable legacy that is still alive today
at GeorgeRanchHistoricalPark, a living history partnership of
Fort Bend County Museum and The George Foundation.
The George Ranch Historical Park
is delighted to invite the community to share in the 25th Anniversary Celebration on July 13.  In appreciation of our many friends and supporters, there will be
free admission for everyone.

Hot dogs, chips, soft drinks and sno-cones will all be served for 25 cents each for as long as the supplies last!  Please join us in this milestone event!