Open for Field Trips and Group Tours Tuesday- Friday. Open for General Admission on Saturdays from 9:00 a.m. to 5:00 p.m..

For more than 100 years, black cowboys played an essential role in Fort Bend County ranching
operations. At the George Ranch specifically, four generations of black cowboys worked alongside four generations of the George family, leaving behind a rich legacy of black cowboy heritage that is unique to this part of Texas. This Saturday, the 2nd annual George Ranch Rodeo will spotlight this amazing history and honor cowboys Fred, McCullar and Ben Smith.

Fred Smith was born in 1857 in Texas. He worked as a cowboy for the Davis and George families for most of his life, a career path his sons McCullar and Ben would also follow.

Fellow cowboy Johnny Hudgins described Fred in one of his oral interviews: “Old man Fred Smith, he was an old cowboy. His rope never hit the ground. Every time the rope left his hand, it was on something. […] Henry Jones called him out there and called old man Fred and old man Wes Knight some brain people then. […] Old man Wes Mack and old man Fred Smith, they’d look at those calves.  And you’d put those calves all in that lot like over way yonder together. They were man-handling the calves and would throw them by hand. He could take about 10 of them, maybe 12 of them.” 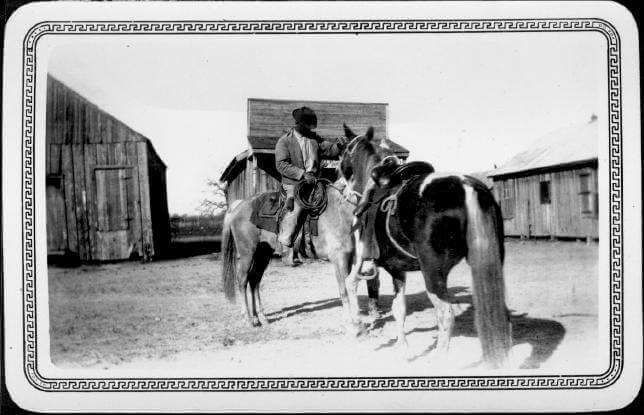 McCullar Smith worked as a cowboy for the George family in the early 1900s. Working full-time alongside his brother Ben, McCullar was deeply respected by both the other cowboys and Mr. George.

Johnny Hudgins commented, “Whenever that rope would leave their hand, whatever they were roping…he got him.”

Oscar “Lightning” Autrey remarked, “Old man George would come out there and look for him…see what ‘Cullar would say about it. He wasn’t going to move until he’d see…because he knew ‘Cullar knew everything about his cattle.”

Ben Smith was also long-time cowboy for the George Family.  He and his brother McCullar started working at the Ranch as teenagers, following in their father’s footsteps.

Jack Sherman remarked about the brothers, “They could rope catch any leg you wanted about as fast as you want . . . any leg you tell it.”

Johnny Hudgins remembered Ben in his later years, commenting, “His name was old man Ben Smith. He was a character rider here. And when I got up enough, then he would take me with him.  We’d go as far up here as you could go.”