154 years after Juneteenth, discover the stories of African Americans who contributed to early Ranch history

154 years after Juneteenth, discover the stories of African Americans who contributed to early Ranch history

By KRYSTAL WILLEBY
Director of Programs

On June 19, 1865, in Galveston, Texas, Union General Gordon Granger declared, “The people of Texas are informed that, in accordance with a proclamation from the Executive of the United States, all slaves are free.”

This simple act broke the chains of slavery in Texas and changed the landscape of our country forever. This summer, 154 years after the anniversary of that simple but earthshattering moment, we honor the memories of some of these early African American individuals who lived and worked here on the Ranch and made significant contributions to the early history of Fort Bend County:

Born into slavery in North Carolina in the 1790s, Arcy is thought to have accompanied Henry Jones and his family on the difficult trek to Texas in 1822. Enslaved as domestic help, Arcy assisted the Joneses in building a home on the new frontier, cooking for the family and helping Nancy tend to the children. She also raised a family of her own and became the matriarch of the sprawling Edwards family. When Henry Jones died in 1861, Arcy was the only enslaved person to remain undistributed to the Jones heirs. She lived out the rest of her days with her daughter Jane.

Born in Africa in 1826, Firema (also referred to as Firmna) was brought to Cuba along with 80 others on August 29, 1836. Hiram Edwards, who was captured and traded along with Firema, “remembered being caught by the slave-hunters in Africa where he was swimming with other children in a creek.” Firema was acquired by the Jones family sometime between 1836 and 1850 and later married Arcy Morton’s daughter Celia, who had been born into slavery in 1830. After emancipation, he signed a labor contract to work for William Ryon and registered to vote at the earliest opportunity – sometime between 1867 and 1869. In 1884, Firema and Celia fulfilled the dream of many former enslaved individuals: they became landowners. The land and accompanying home remained in their descendants’ hands into the modern era. 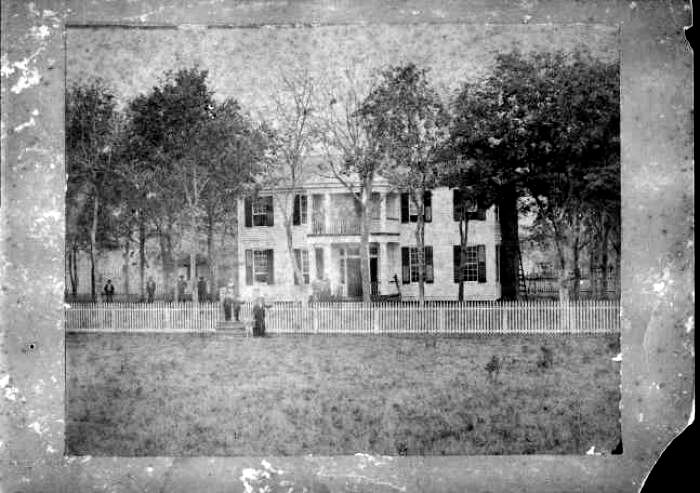 ABOVE: This circa-1870s image is thought to be the only surviving image of the Ryon Prairie Home. Looking closely, you’ll notice the African Americans pictured in the front yard—some of whom are likely mentioned in this article.

Peter Martin was born into slavery in Georgia between 1800 and 1810. In 1824, he accompanied his long-term owner Wyly Martin to settle a new land grant in Austin’s colony. Between 1819 and 1829, Martin was permitted to marry Judith, who was enslaved by the Jones family. Peter played an active role in the Texas Revolution, carrying supplies to the Texian Army from San Felipe to San Antonio. He also proved to be an adept ranch manager and stockhand, taking charge of the stock farm from an often-absent Martin. By 1835, Wyly began taking steps to emancipate Peter in his will. At the time, freed slaves were not allowed to remain in Texas. In 1839, Wyly petitioned the newly-formed Texas Congress to allow Peter to stay in Texas after his emancipation. After a heated debate, Congress approved the bill and Peter became the first emancipated slave legally permitted to remain in Texas. Wyly died in 1842 and Peter gained his freedom. Peter continued ranching after Wyly’s death and when Texas entered the United States at the end of 1845, he was ranked a respectable 23 out of 146 in the size of his herd in Fort Bend County. With profits from his ranching operation, he effectively “rented” his wife and children from their owner so they could reside with him at his ranch. In 1863, Peter died; Judith and her children were then evicted from their home and the property was sold. She protested, but had no legal rights to inherit property or sue in court. Though she did receive the profits from the sale, she vowed to continue to work to claim her former land “while she had breath in her body.” After her own emancipation in 1865, she determinedly set out to regain what had been forcibly taken away from her. With the support and backing of William and Polly Ryon, she petitioned the 21st District Court in Fort Bend County in October 1871 for the return of her husband’s property and her legal right to own it. After a brief trial in July 1872, the jury ruled in her favor; when it was later appealed, the Supreme Court of Texas affirmed the lower court’s decision.

Collie, who later took the name Cora, was purchased by William Ryon in 1852 at the age of 25. Most likely born in Louisiana, Cora was one of the few persons actively purchased by the Ryons (whose primary slave holdings came through inheritance and birth). She served as cook for the family for many years; in 1860, she married Bob, who was enslaved by Henry Jones as a cowboy. When Henry died in 1861, Bob was inherited by Henry’s daughter Polly, which gave him the opportunity to live with his wife for the first time since their marriage a year earlier. Cora and Bob had three children: Louisa, Y. Union and Millburn.

After emancipation, Bob chose the last name Jones. Like many others, he registered to vote at the earliest opportunity and, within three years, owned five horses and 40 head of cattle. In 1878, he purchased 200 acres of land; by 1899, he had acquired nearly 1,600 acres – the most land owned by an African American in Fort Bend County at that time. In addition to his farming and ranching endeavors, Bob also established other businesses in the county. In the 1880s, he built a steam-powered cotton gin in Thompsons and opened a general store, saloon, blacksmith shop and several retail properties.

These are just a few of the stories of the 47 men, women and children enslaved by Henry Jones and the 16 people enslaved by the Ryons. If you’d like to learn more about their stories, a good place to start is Michael R. Moore’s thesis “Settlers, Slaves, Sharecroppers, and Stockhands: A Texas Plantation-ranch, 1824-1896.” A copy of this thesis is available at the Houston Public Library. This article also references Clarence Wharton’s “History of Fort Bend County.”