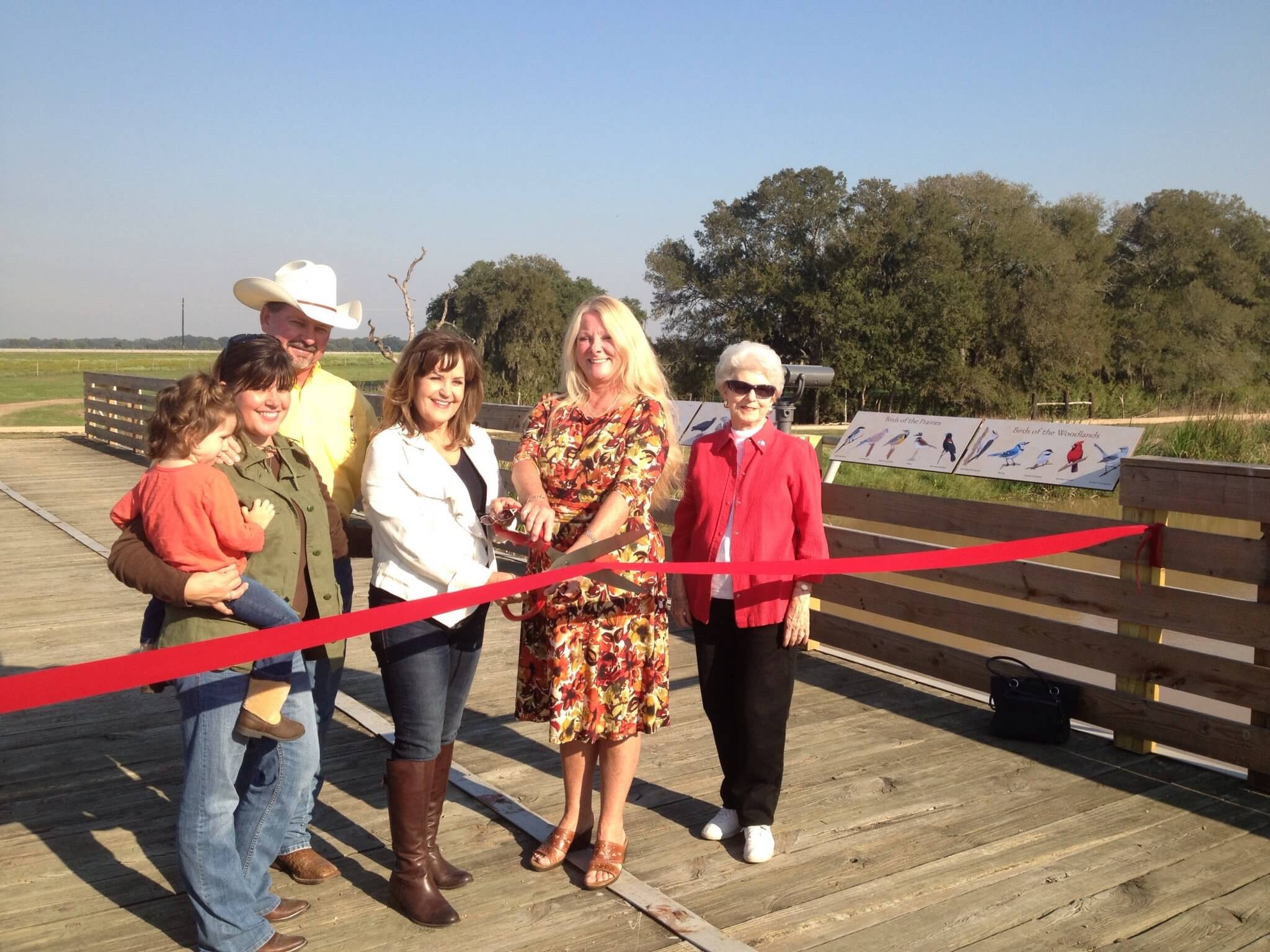 Approximately 50 family members and friends gathered together on Friday October 25, for the ribbon cutting ceremony launching a new trailside exhibit at the George Ranch Historical Park. The exhibit is located on the bridge at the midway point of the George Ranch Heritage Trail at a particularly scenic section overlooking Dry Creek.

George Ranch Historical Park Director Candace Jones explained that the project had been in the works for about a year and celebrated Orin’s love for sharing the prolific bird life with visitors and friends. The exhibit consists of four panels showcasing original artwork of twenty common birds of the prairies and wetlands. The highly detailed watercolors were done by Austin artist Elishea Smith who specializes in bird images. An all-weather spotting scope is also included for up close viewing of birds and wildlife.

A dedication inscription on the first panel reads “And He will bear you up on eagle’s wings…and hold you in the palm of His hand.” Bird identification exhibit and spotting scope given in loving remembrance of Orin Covell by his family, friends, and the George Ranch Historical Park.

Director Jones spoke of the generosity of Covell to his community and the great sense of loss felt when he passed away. She mentioned his selfless service given to so many organizations such as the Rotary, the Fire Department, and the Fort Bend County Museum Association.

Covell had served for about ten years as the Administrative Officer for the George Foundation and had officed at the Historical Park for several years. During that time he had enjoyed interacting with visitors and would frequently take them for an impromptu bird watching drive along the creek as a special treat. Jones stated that, “Orin always took the time to make a personal connection with people and he was never too busy to stop and visit. He was very generous and caring and loved sharing information with others.” She continued, “I feel that this exhibit will keep that connection alive for future visitors. It’s a very personal and lasting tribute that will continue to bring pleasure to many thousands of people.”

George Foundation Ranch Operations Manager Rocky Parr remembered the many times that he and Orin had driven along the banks of the creek to take a quick break from the office. Parr said, “Orin was always spotting some new bird and would ask me to take a photo so he could look it up on the computer. I know he would really like this new exhibit.”

Covell’s wife Becky and his sister Ann Council thanked Jones for her commitment to create the exhibit and expressed their deep appreciation to the George Ranch Historical Park and the other donors who funded the project.

The exhibit was officially opened to coincide with the 30th Anniversary of Texian Market Days on October 26th.

Orin’s daughter Lara and hist two-year-old granddaughter Brooke were the first to use the bird-watching scope at the new trailside exhibit.