Willie Thomas was born on January 30, 1930 in Richmond, Texas. He was born to Johnnie and Josephine Thomas who had worked on the Ranch since 1925. He attended school in Crabb, just down the road from Richmond, until the age of 9 when he left school to help his family.

Willie started working for A.P. George as a yardman and was later promoted to taking care of the milk
cows. After milking, Willie would jump on the cows’ backs to see how long he could ride them. He was also known to test his skills on the Ranch hogs. 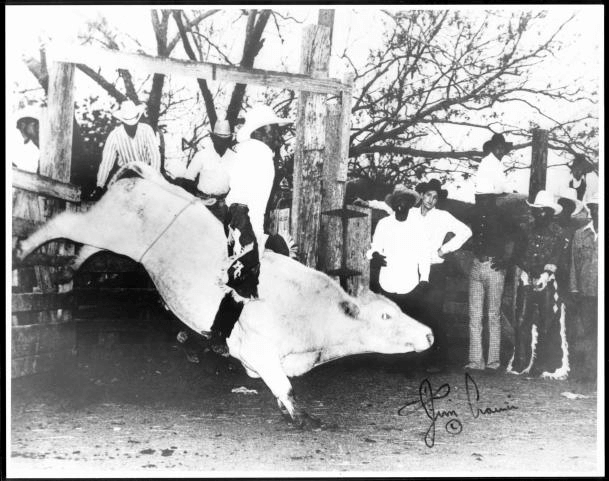 Willie participated in his first rodeo in 1948 in Hempstead, Texas. This first attempt at bull-riding
was a learning experience: he was bucked off the first bull, and was disqualified on his second ride
for touching the bull with his hand. He caught on quick, however, and in his second rodeo, Willie
came in 3rd and won $35. For the next three years, Willie competed heavily in the local rodeo
circuit and would go the whole stretch without being thrown from a bull.

Willie competed in his first professional rodeo in San Antonio, Texas in 1953. During the
competition, Willie steadily worked toward winning the grand prize, but timekeepers for his final
ride unfairly denied his win. Despite riding the bull for 14 seconds in the final round and then
stepping off the bull, the timekeepers still blew the whistle to indicate he did not complete his
eight-second ride. This event left a bitter taste in Willie’s mouth, and he did not ride in another
Professional Rodeo Cowboy Association (PRCA) rodeo for a year.

Willie eventually returned to the professional rodeo circuit in 1958 and had great success in
Boston, New York, Harrisburg, Pennsylvania and Austin. Willie won “All-Around Cowboy” each
year from 1953 to 1969. Throughout his rodeo career, Willie collected 20 gold belts, more than
15 trophies and as many saddles. After a career of distinction, Willie was inducted into the Texas
Rodeo Hall of Fame in 2004 and the National Multicultural Western Heritage Hall of Fame in
2008.

Willie Thomas passed away on Friday, April 24, 2020. Our heartfelt condolences are with his family and friends as we mourn his passing and celebrate the legacy he left behind in Fort Bend County and rodeo history.